Second Editions of the Common Law: Bracton, Coke and Blackstone

The Washington State Law Library has a large collection of British legal treatises, statutes, and case reporters published between the 1500s and the 1970s. Although we no longer actively collect English law due to cost, the collection is a treasure trove for those studying English legal history or looking to cite the English common law in an appellate brief or opinion. The Library owns the second edition of three critical common law texts. While not particularly valuable as rare books, both because they are second editions and because they were printed in large print runs and are widely held, these three titles are great treasures of the common law and are still frequently cited.

Each represents an attempt to capture and clarify the unwritten customary common law of England at a particular point in time: Bracton at the end of the long reign of Henry III, Coke during the tumultuous reign of the Charles I preceding the English Civil War, and Blackstone, during the rise of the British Empire, prior to the American Revolution.

The common law is English customary law, in contrast to statutory law, applied by judges to resolve disputes. The common law is at the root of Washington’s law and is frequently cited by the Washington Supreme Court. While it is most often thought of as forming the frame for property, contract, and tort law, it also can be found in criminal, family, and constitutional law. For example, Blackstone was most recently cited by the Washington Supreme Court in Justice Madsen’s opinion in City of Seattle v. Long, 198 Wn.2d 136 (2021), which went back to the Magna Carta (1215) in anaylzing excessive fines.  Washington’s 1862 Civil Practices Act explicitly adopted the common law of England except where inconsistent with territorial or federal law :

The common law, so far as it is not inconsistent with the Constitution and laws of the United States, or of the state of Washington nor incompatible with the institutions and condition of society in this state, shall be the rule of decision in all the courts of this state.

In a historically progressive state like Washington, it is interesting that the Legislature subordinated the common law not only to state and federal statute but also the “institutions and conditions of society in this state”, effectively recognizing that ancient English legal customs may no longer be appropriate.

The oldest of the three books, Bracton’s De Legibus, often referred to simply as Bracton, was a manuscript likely written by multiple authors with Henri Bracton being the last. Bracton was both a jurist who sat on the Coram Rege, which later became the King’s Bench, and a Catholic priest, who as Chancellor of Exeter Cathedral when he died. Harvard Law Library’s Ames Foundation digitization project has digitized their illuminated manuscript copy: 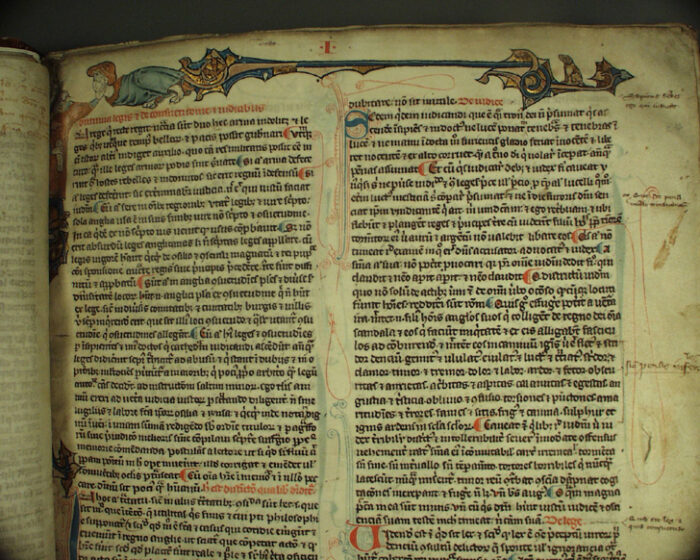 Our second printed edition is from 1640, published some four centuries after the creation of the manuscript, during a period of great unrest in England, two years before the English Civil War. Bracton was cited by Sir Edward Coke in his legal battles with King James about the limits of the power of the crown which may have been one of the reasons for printing the second edition of this text in 1640.

The second of the texts is Sir Edward Coke’s The Institutes of the Laws of England. Coke was a lawyer, solicitor general, attorney general, justice, and then member of Parliament in his long career spanning the reigns of Queen Elizabeth I, James I, and Charles I. He is most known for his arguments that the Rule of Law constrains the power of the crown. A woodcut of him graces the Preface of the second edition: 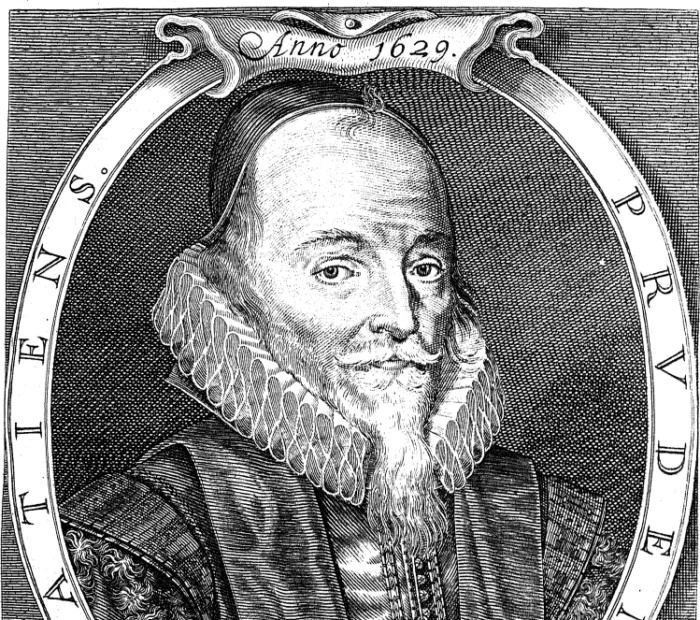 The first part of the Institutes Coke’s commentary on Littleton’s Tenures, the first English property law text written in the 15th century. The first column below is Littleton’s text, written in Law French, the Norman language of court. The second column is Coke’s translation to English and the third column is Coke’s commentary. The sheer artistry of the printing, with multiple fonts and sizes, along the sophistication of Coke’s analysis of the law, make this a lovely volume to use. 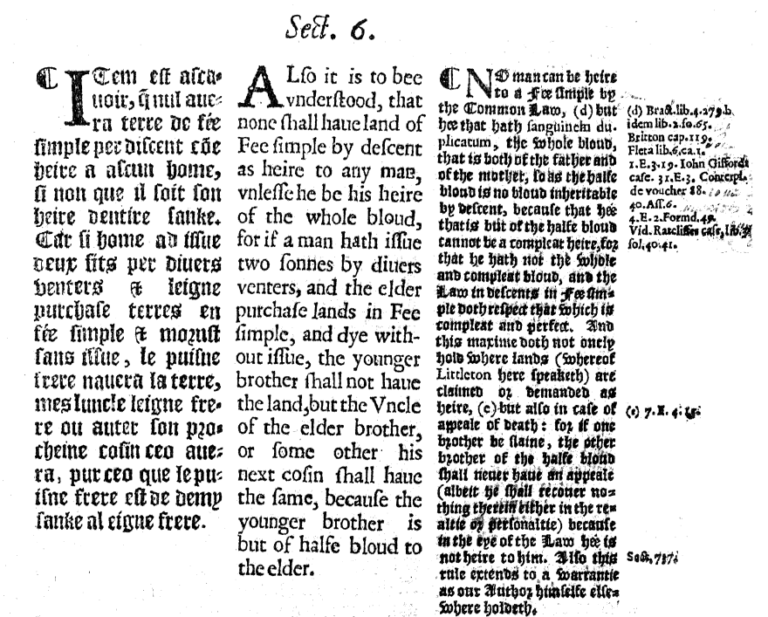 Coke was foundational as it summarized English law during a critical time in English history, as Parliament and the Stuart kings wrestled for control of England.

William Blackstone built upon the foundation laid by Coke. He was a mostly unsuccessful Barrister who was working as the Bursar for Oxford University. At the time, law was an academic subject at Oxford, focused on Roman and continental law, rather than on practical English law. Blackstone advocated to teach a course on English law and, when finally approved, it proved to be very popular as it made law more accessible to students. His commentaries grew from his lecture notes and were widely purchased making Blackstone wealthy. After Oxford, he became a member of Parliament and, briefly, a Justice on the Courts of King’s Bench and Common Pleas. 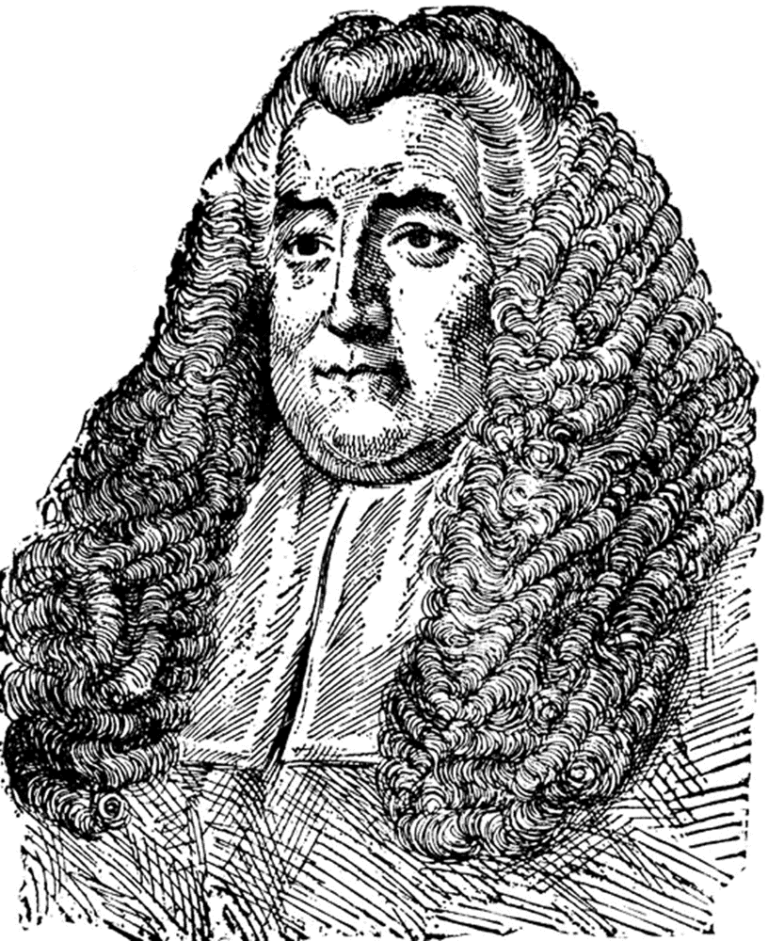 Blackstone provided an easily read summary of English common law which was immediately widely used by American lawyers. Contemporaneous to the Washington territorial Legislature’s adoption of the common law, on September 25, 1860, in a letter to a student interested in becoming a lawyer, Abraham Lincoln wrote that the best was to learn law was to “…get the books, and read, and study them carefully. Begin with Blackstone’s Commentaries, and atter reading it carefully through, say twice, take up Chitty’s Pleadings, Greenleaf’s Evidence, & Story’s Equity &c. in succession. Work, work, work, is the main thing.”

Each of these three second editions is a snapshot of the common law over a five hundred year span of English history. The books themselves represent the diversity of printing, from the simplicity of the second printed edition of Bracton, to the grandeur of Coke’s Institutes, to the simple dignity of the four volumes of Blackstone’s Commentaries. 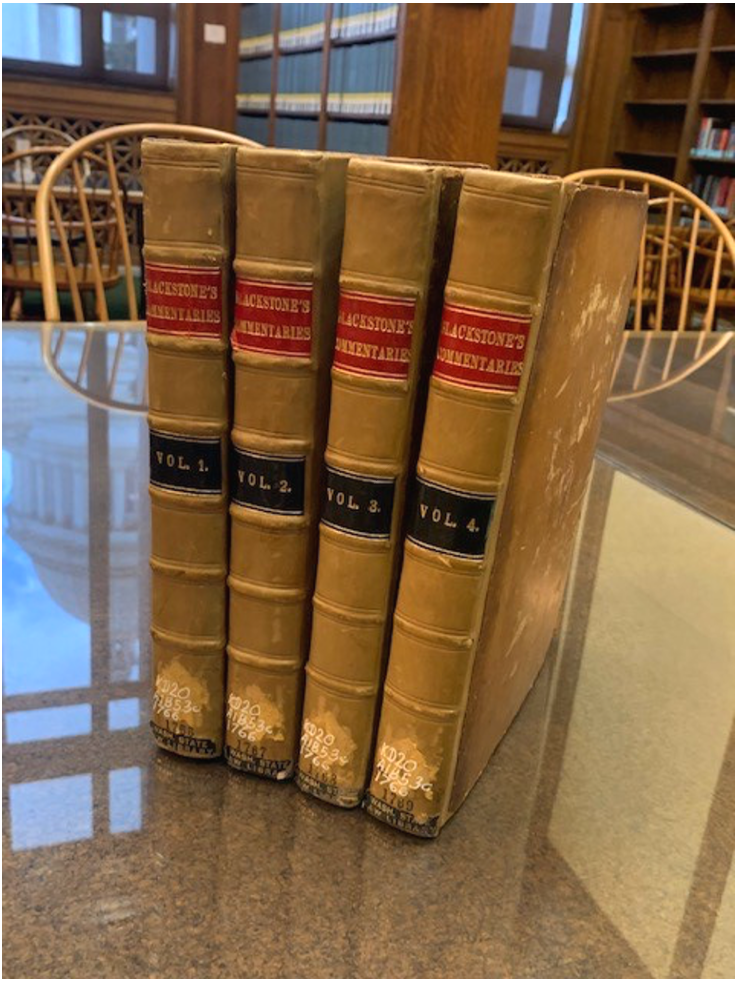